EVENT FOR HOLOCAUST MEMORIAL DAY 2016 : The story of the Czech Scroll in the Library of SCDE

24th January 2016   The Scroll in the Library at the Sion Centre for Dialogue and Encounter is one of the “Czech Memorial Scrolls” which were rescued from the deserted synagogues across Bohemia and Moravia and brought to Prague in 1942.  The Jewish communities themselves largely perished, but 1564 Scrolls were brought to London almost 50 years ago.

We were privileged to welcome Rabbi Andrew Goldstein who told us the story of the Czech Scrolls and  in particular, the Scroll from the Jewish Community in Sedicany which is in our Library. 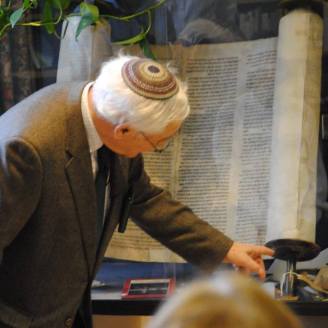